portrait, a comic by simon hanselmann

The melodrama of indie comics culture is a lot like reality television; I find it entertaining as an observer, but I’m glad that’s not my life. The stock characters include a broad spectrum of Dumbs and Post Dumbs, eccentric sociopaths, and your racist uncle, and I prefer to gawk at these turkeys from the side of the stage like the judgmental twit that I am. Oh, I’m not talking about the good eggs. (I'm not talking about you.) I’m talking Whore Feud, or maybe that hobo-themed wedding. I mean, dang, we all wish wish that Comics were better, but watching that stuff is definitely the next best thing. 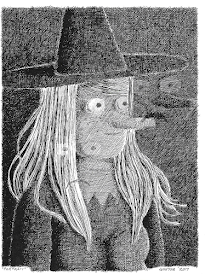 Here at the intersection of entertaining, off-putting, and ridiculous you’ll find Truth Zone (TZ), a series about alternative comics culture by indie superstar Simon Hanselmann. TZ is a long-running web series at Comics Workbook in which the artist makes fun of indie cartoonists, publishers, critics, fans, and other industry figures. The online iteration of TZ is often funny, and sometimes approaches what you might call criticism. But I’m here today to talk about “Portrait,” a little zine you can buy on Hanselmann’s website. The first run of “Portrait” (which was, at the time it was sold, advertised as its sole run) was around 500 copies. It sold out quickly and has since had at least one additional printing, which to my mind raises an interesting question—namely, how much of an audience exists for a comic like Truth Zone?

I ask because recently I realized I’ve lost any ability I might have once had to discern what is truly niche. Internet culture is near mystical in that it has rendered everything universally known and totally obscure at the same time. I had this epiphany in the middle of the night not so long ago, when I came upon this tweet making fun of a writer for New York magazine who misunderstood a joke that someone had made about a dumb political cartoon: 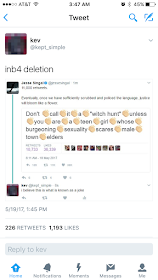 It's seriously sort of crazy, the levels of stupid arcane knowledge you need to parse this tweet:
I’m probably missing a level or two? Point is: 1,200 likes. I dunno, maybe 1,193 people truly heart that tweet. Or maybe it’s that theory I have, where people never feel more self-satisfied than when they recognize an obscure, layered reference. It makes us feel clever--like we're part of some club.

Hanselmann’s “Portrait” traffics very heavily in this type of insider thrill. Subtitled “Fake Criticism,” its short strips parody tumblr callout culture, James Sturm, Tom Spurgeon, Nobrow, Box Brown, the president of the Comic Book League Defense Fund, and any number of other people who I have forgotten or never recognized in the first place—but the references are always coded and frequently elliptical. Hanselmann presumes readers' familiarity with his subjects, obscuring real names and associations, which makes it more difficult for outsiders to understand what he’s talking about.

Even if you’re not a fan of Megg & Mogg, it's interesting to see how Hanselmann filters these anecdotes through his characters, especially the way in which their established personalities add depth to his commentary. More generally I reckon the degree to which you’ll enjoy a given strip depends upon your level of contempt for its subject. My favorite with a bullet was hobo wedding because the only thing funnier to me than the idea of a hobo wedding is the groom getting super mad when someone brings it up on his book tour years later.

But what about when you don’t have contempt for Hanselmann's subject? What about when the subject is in fact you, or people like you? I wrote here about Hanselmann's "Wes Craven's Crumb," which was at least in part about me...probably. The thing is, in a culture where everything is both universally known and impossibly obscure--as it is on the Internet, as it is in indie comics--a lot of stuff becomes plausibly deniable when your preferred mode of talking shit is encrypted.

Sometimes these are sharp little comics, and sometimes they’re just nebulously rude. Take, for instance, the opener, “Change.” Hanselmann’s target here is James Sturm, but sharp-eyed readers might notice that Hanselmann replicates some of the exact same attitudes towards Tillie Walden that got Sturm into trouble in the first place. 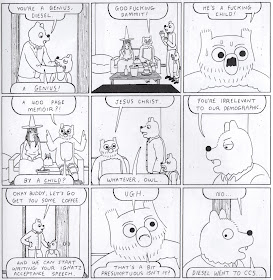 Twitter user @FstewartT made some astute comments about where this comic went wrong. This is just an excerpt: 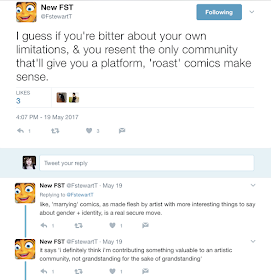 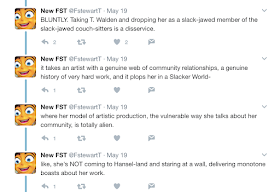 Seeing these tweets, Hanselmann took to the DMs to explain himself, inadvertently revealing that he had exactly the attitude towards Walden that he was so vehemently denying. 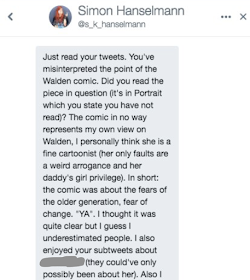 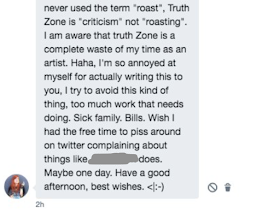 These messages are a veritable Bingo card of bitter old-man comeback crit (the very thing Hanselmann was supposedly skewering):

It's all very Fantagraphique, is it not? Same old shit, thinking it's some type of new shit. Well, anyway, for your information, Simon Hanselmann was NOT mad. It's totally fine with Simon Hanselmann if you have some sort of reading comprehension problem, and also if you don't like jokes.

@FstewartT wasn't having any of that, lol.

Not to worry: Simon wasn't mad about that, either. He's just sorry no one gets it. It's cool with him that you're such a fucking moron, and he definitely wishes you the best. xoxo <|:-) 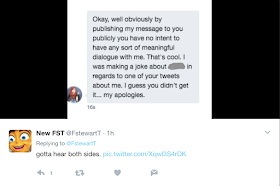 Once you understand that Hanselmann's roast comics are often diametrically opposed to his idea of himself, you begin to pick up on more dissonance in these comics--ostensibly progressive subjects with weird retrogressive undercurrents. It's incoherent and at times dishonest, taking the most extreme and misguided version of an argument and implying that it represents something larger. 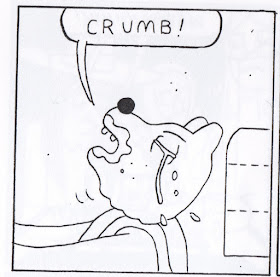 Is this art? By Hanselmann’s own admission, no--but he certainly sells it as such. Maybe I’m mistaken, but I’d wager most of the people buying “Portrait” or the bags of literal garbage (Artist Trash™) he sells in his online shop are fans of his art comics and his persona, not consumers of his criticism. Here's Hanselmann in a recent interview with Dan Nadel:

The Truth Zone is just the jerky side of comics. The first one, Landscape, I subtitled A Safe Space for Assholes. It's a safe space to just be a prick and just shit talk people. ... I try not to engage with the internet too much. If I'm gonna make snarky comments, I do it in comics form. Then I make money off it, and it's like an artistic statement. And I feel like it's better somehow.


Better for who? Just as an example, let's take a look at “The Birthday Reporter." 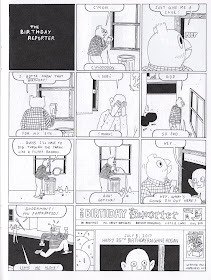 Had this appeared online at Comics Workbook, it would have been a gentle spoof of the Comics Reporter that maybe also had something to say about the ongoing conversations surrounding comics journalism more broadly. Compiled in a limited-edition zine and sold for $8 plus shipping, it seems to me that it becomes something else: having fun--and making money--at someone else's expense, in an ecosystem in which they're likely to hear about it second- or thirdhand. (The thousands of dollars Hanselmann made off this throwaway gossip comic inarguably makes him one of the best paid comics "critics" today.) It's interesting and perfectly meta, the dynamic these tiny batches of zines create: in-groups within in-groups and rumors within rumors. But it's also a straight-up chickenshit form of "criticism"--and it's telling that, when he's confronted with that, Hanselmann will piss on your leg and tell you it's raining.

Sometimes it's a fine line between being a critic and being a piece of shit. It's something I think about sometimes, as someone who tends to take a tone not unlike Hanselmann's. (Not so long ago, for instance, we both went in on All Time Comics.) We could have any number of conversations about what criticism is--what it should accomplish, and how--but to me, it boils down to this: If you're going to drag someone, do it out in the open. Own it. Otherwise, you should stick to making fun of people privately, behind their backs, like a goddamn adult.

Is “Portrait” art? No, not really. Is it criticism? Nah. I think it's best described as an artifact—one that perfectly encapsulates a certain aspect of the alt-comix milieu, with its middle school-grade sociopathy and infighting. I find it entertaining, but I don't respect it. Hanselmann says he's turning his focus inward for the next Truth Zone comic--a step in the right direction, ethically, but one that I will read with low expectations. Hanselmann has many gifts, but self-awareness is plainly not one of them.