Occasionally on social media there will be a thing where people confess their "unpopular opinions." A true coward's meme, the UOs is where people unload takes that they've privately long believed to be clever, but are too boring for normal people to talk about. As it happens I have one of the last opinions on earth that is truly out of step with every corner of society: I hate Mr. Rogers.

I hate Mr. Rogers now, I hated him when he was alive, and I hated him most of all when I was an actual child. Fucking haaaaate. Not just him, but also his hateful slippers, his nightmare cast of puppets (especially that ruddy faced one, not to be too unhinged but that puppet was seriously a cunt), hate his slow way of talking, his whole condescending way of being.

I always secretly took this to be one of the most fundamental things about my personality, and possibly the key to everything that's wrong with me, but recently my mom revealed that it was a simple case of modeling. "Oh, I think you got that from me," she said. "That simpering tone of his, I honestly couldn't stand it." My childhood role model was the Cookie Monster, which was maybe a more pure antecedent. I'm still living his values to this day.

I've been waiting my entire life to confess this unpopular opinion, but after this year, which seems to be the Mr. Rogers centennial or something (?), I figured I'd have to take it to the grave. Well anyway I guess tonight's my night because I'm deeply, unreasonably, characteristically irritated by the take that Rob Rogers being fired from the Pittsburgh Whatever is some grave affront to democracy. Oh, you're talking about the guy who drew this? 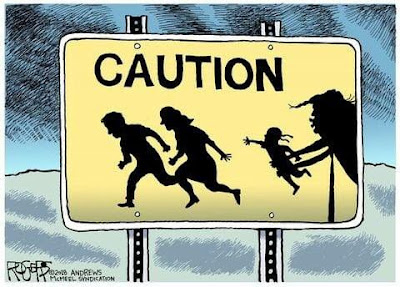 I honestly can't believe I have to say this: This is a terrible cartoon. TERRIBLE. Terrible on every conceivable level on which a piece of "art" can be bad. Terrible even for the (almost uniformly) shitty genre of political cartooning, which is itself inconceivably terrible. I'm not even cherrypicking! Literally every spiked cartoon of this guy's I've seen is this degree of bad. Of course they're running them all at the Nib, lol. Let freedom ring.

It's honestly amazing to me that people care about this? Rob Rogers and Ted Rall? American heroes, the first line of the First Amendment in the good old U.S.A.?

*holds up that one cunt-faced puppet* These people are idiots, and they are actively making us all dumber. *flaps her horrifying toothless mouth for emphasis* GET A GRIP
Posted by Kim O at 10:47 PM 2 comments: Links to this post

Heavy week's going out heavy. I don't know if you read this. My nephew's fourth birthday is next week, so a year younger than the boy in the story. I've been making him this little book about his life. Going through pictures. Kids are unhinged narcissists like everyone else but they don't have to hide it yet, so I know he's going to love it. His father's been out of town these last two weeks; just knowing the magnitude of this (very real) anxiety and sadness his father's absence for a *business trip* has introduced into his life gives me some perspective on what that article is talking about. My brother-in-law has sent him a postcard every day he's been gone. My sister put the first one in his carseat for him to find, texted me about how solemn he became when she told him what it was. "It looks very special," he said, and clutched it to his fucking chest. He's not quite as maudlin as me yet but he's getting there. I have full faith I'll have him listening to one of those Whole Foods muzak kids' version of the Cure's oeuvre by age five at the absolute latest. Anyway reading the NYT thing I feel connected to the little boy in the story in this distant muted distinctly American way. Reading it I feel things that are bigger than me, things I can't understand but sort of make me want to die, and there are times I don't know where to put it or a constructive outlet to channel it into or know what number to call and ask for the manager because that's how my kind handle these things.

I was reading Ronan Farrow's new book these last few days, about the death of diplomacy in American government. I guess I knew a lot of it already but he's a writer, like a writer-writer, and seeing it all laid out in this way that was so stark was also something. I recommend it. At the center of it were these two old-school diplomats, including a woman I'd never heard of who was the last American with a human heart in Pakistan. She was prosecuted by the government for espionage for stuff like having dinner with Pakistanis, because we're in a time and place and point in the War on Terror where there's no longer a framework to recognize that as a thing that someone who works for the Foreign Service might wish to do. Richard Holbrooke worked so hard to get Obama's administration to turn away from literal warlords committing unspeakable atrocities in the name of fighting the Taliban to maybe get some money to some fucking farmers that his actual heart burst in his chest. That's how hard he cared about Afghanistan. You know, he died and that was that.

So anyway that's been the week in my brain leading up to today, to Bourdain. One of our last Great Diplomats. I say that with absolutely no exaggeration. Bourdain was also someone who meant something to me on more of a personal level, not because I knew him but because I could see myself in him. He was someone else who lived more than one life and it's wild when you see someone else who got away with it, who's walking around and talking about it all in the right way, a piece of your story expressed through this person who has--who had--a much, much better personality. Bourdain didn't have that repulsive self-glorifying tendency of every writer I ever admired growing up. I always thought that was because before he was ever a Writer, he had an actual job. He had this attitude of humility (not as a celebrity, but as a person in the world) that I found relatable. I hope I have it too.

In my twenties I was in New York for a month; it rained the whole fucking time but a highlight was a visit from my friend Kevin and the night we went to Les Halles. I think Bourdain had already moved on by that point, but it was just this emotionally charged thing of visiting this place that had been so important in the life of someone we both idolized. Kevin and I grew up in this dumb town, both people who were super interested in humor and food in a place where there wasn't a lot of interest in those things. Bourdain was an international phenomenon from the beginning I guess, but these were still the early days of internet, where you felt like you were really finding something, like it was yours.

By total fluke I came across an incredible story about Bourdain yesterday, not even 24 hours before he died. This is Ben Rhodes, the big Obama guy who has a new memoir that I was skimming for work. 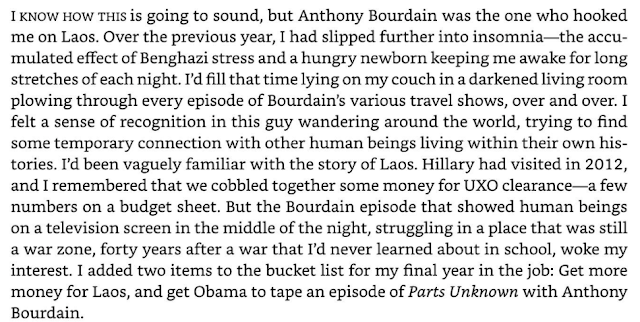 I feel just as self-conscious as everyone else who's been talking about this today...but I'm grateful to have come across it. I have a feeling, knowing Bourdain got to hear that. It's a lesson too, that you can mean something like that in someone else's life and not even know it. I'm adding it to my list of things to think about when I feel these things that are bigger than me. Pulling down his books from my shelves and maybe cook myself a steak. It's a hard world, and Bourdain's gift was never letting us lose sight of that, even as he offered it all up like a jewel.