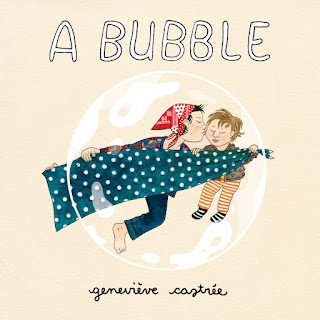 Someone new comes to town. Someone goes away. There are only two plots in all of literature, a late mentor once told me, and it’s only now I realize he was paraphrasing another dead novelist. I think in comics there’s undue focus on innovation—on who came first, and what comes next—when most of the time it doesn’t matter. If there are only so many ideas, what’s important is the articulation. It isn't about who has an idea so much as who conveys it in a manner, in a time, in a place, so that the idea feels like it's speaking to you.

My favorite comic this year is an eloquent exploration of not one, but both, of the classic storylines in just 14 pages and a few hundred words. Four months after her daughter was born, the cartoonist Geneviève Castrée was diagnosed with terminal cancer. She was dead before the girl turned two. In between, Castrée made A Bubble, a children’s board book about their time together that was published posthumously. It is a story that could’ve easily been weighed down by sentimentality, conveyed with a lightness of touch as effervescent as the book’s central metaphor.

The artist’s conceit of suspending herself in a soap bubble was of course a reference to the isolating nature of Castrée’s illness, which had its own demands. (“That’s what the bubble book was about,” her husband told Pitchfork. “She knew that she was shut off from us and the people that she loved.”) And yet it seems to me the bubble also conveys a certain intimacy, a nod to the almost otherworldly relationship between mother and child in those first years of life. A bubble’s surface is semipermeable, and Castrée’s daughter appears inside and outside its barrier, or sometimes both. 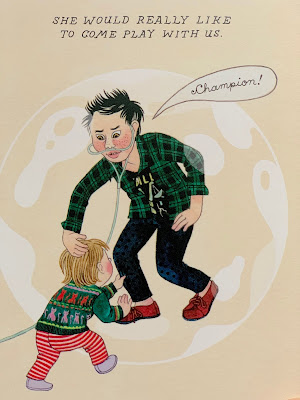 Every page, with the marked exception of the book’s only spread, is a portrait of mother and daughter on an unadorned background, as though they live in a world where nothing else exists. The story takes place during that liminal time when a child begins to grasp the concept of the autonomous self, and a mother learns how to let go. To build a bridge, Castrée wrote the book from her child’s point of view, and drew herself into places where she never was, and never will be. A Bubble is, on one level anyway, a mother’s lament. Many readers will relate to Castrée’s ambivalence about working too hard, I think. 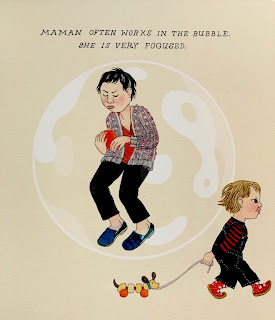 But as much as this is a folk tale, it is also one woman’s story. It must have been a strange and heavy task for Castrée to compose what she surely knew to be her final work of art, and stranger still to balance the personal, painful nature of the story with its public consumption (which she planned). What we are privy to, as this late woman’s readership, is her effort to preserve a time that her small daughter will not likely remember. This is heirloom-quality drawing, down to the lovingly rendered textiles that comprised the Elverum family’s real clothes. The book’s most magical imagery, from the single spread I mentioned before, reminds me of the work of Frida Kahlo, with fauna and wildlife serving as emblems of the family’s home in the Pacific Northwest. Like Castrée, Kahlo knew pain and suffering, and there’s a powerful melancholy magic in how both women imagined life beyond the confines of their beds and bodies.

Eternity no longer appears as such, but only as refracted through the most ephemeral of things. I think Castrée’s strength as a cartoonist was in her ability to locate truth in contradiction. The great irony of A Bubble is that the artist died before she ever drew a single bubble on the page, leaving the work incomplete. I suppose there’s some technical reason that she saved the bubble for last (a task that was ultimately carried out by her friend Anders Nilsen, per his remarkable essay for The Comics Journal), but I find myself wondering about the significance of that membrane—and its absence—in this story about life and death. It is there, and it also isn’t there, a marvel in all its porousness and integrity. In art, in memory, in progeny, there is a sense in which we persist when we’re gone. On the back cover of the book, the artist walks off the page. She doesn’t saunter into the abyss, to the right, but exits left, as if she’s returning to the story inside. Castrée’s daughter trails behind, blowing bubbles. 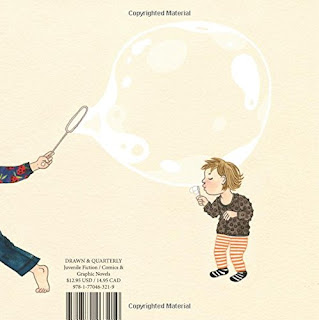 A dumb quirk of human existence is how our most fundamental experiences, birth and death, transcend understanding. Too often mistaken for child’s play, the purpose and privilege of imagination is to answer these failures of intellect. Our stories are simple, but rarely easy. Someone comes to town, he told me. Someone goes away.
Posted by Kim O at 3:25 PM 2 comments: Links to this post