Nick Spencer is a freelance writer for Marvel Comics who decided to make Captain America a nazi for some reason. Over the last year or so, he's feigned shock at the negative feedback he's been getting from fans because...I don't know...censorship, or something? At least that's his most recent stance in what has been a yearlong parade of incoherent tweets and interviews about how his comic relates to the real world and how the people who criticize his art and politics are somehow stirring up real-life violence against him, oppressing creators, ruining comics for everyone, etc.

A thing I've noticed about arguing with Nick Spencer is that it's very boring, and also pointless. But at the same time, watching him argue with other people becomes a lot more interesting when you've made even a cursory examination of Spencer's past as a failed politician in Cincinnati, Ohio. His shitty politics have a bearing--even if it's not necessarily direct--on his Capt. America storyline, his incessant tweeting (particularly with regard to diversity issues at Marvel), his vocal critique of the badass patriot who punched nazi publicist Richard Spencer in the face, and even Marvel's attitude toward the Captain America blowback in general. The problem is that information about Nick Spencer the Politician is sort of a pain in the ass to find because we're talking about 2003 to 2005-era Internet...about politics in Cincinnati...much of which appeared on his campaign blogs, which he has since deleted.

I'm not here to offer any analysis about Capt. America because let's be real: I don't care. This post is just a quick resource for anyone who's interested in Spencer's political past, but doesn't feel inclined to dig around for it. Most of it is in Nick Spencer's own words.

Before we get going, a quick FAQ:

Are you suggesting that Nick Spencer is a nazi?
No. But I see fascist tendencies in his call to eliminate social services in Cincinnati to fund the rapid expansion of broken-window policing.

What are his politics, then?
Spencer identifies as liberal these days, but in 2005, when he called himself a Republican, his political platform was rooted in elitism, white fear, and subjugating small-time criminals. The running themes I see now that he's "liberal" are a blind faith in authority, pathological self-involvement, and a weird persecution complex.

Are you biased?
Yes! Nick Spencer is an asshole.

I. Background
Nick Spencer ran for a seat on the Cincinnati City Council in 2003 and 2005. He lost both times, coming in 21st and 17th place, respectively. He had a website for both campaigns, got some press (local and national), and was part of a vibrant community of unhinged bloggers around the Cincinnati area.

II. Political Platform
This post focuses on Spencer's 2005 campaign, when his platform was eliminating human services in Cincinnati, beefing up its police force, expanding its jails, and ridding its streets of criminals and homeless people.

In terms of primary sources, first and foremost we have "Fighting for a Safer Community," Spencer's "detailed Action Agenda for taking on the criminals terrorizing our streets." This is an official document from his 2005 campaign. Note that all quotes in this section are from that doc unless otherwise noted, and the ital is always mine.

"Cincinnati's Neighborhoods are under attack," Spencer wrote. "As an Over-the-Rhine resident and business owner, I've seen firsthand what violent crime and drugs can do to destroy a neighborhood. I've gone up against the dealers and thugs in an effort to clean up my block and make it safe for my customers, my friends, and my loved ones. I'm tired of seeing this lawless disregard for order, and I won't rest until I've made all of our neighborhoods safe again."

III. Gentrification Efforts and Racist Blogging
If you poke around the materials surrounding Nick Spencer's failed political career for long enough, you'll notice that when he touts his leadership in the community, he talks about "rebuilding" (i.e., gentrifying) Over-the-Rhine, the Cincinnati neighborhood where he lived and worked. Over-the-Rhine was of course at the center of the Cincinnati riots of 2001, which followed the acquittal of the white police officer who murdered Timothy Thomas, an unarmed black teenager. The riots left a big impression on Spencer--not as a symbol of racial inequity in his city, but for their economic impact on Over-the-Rhine (both in terms of property damage during the riots themselves, and the boycott of downtown businesses that followed). Economic prosperity was an important issue to Spencer, who (along with some other guys) owned an Over-the-Rhine bar called alchemize (lowercase a), where he used to spin tunes once a month under the moniker of DJ Nick.

In his writings, Spencer frequently attributed all the lawlessness and blight he saw in the streets of Over-the-Rhine to "thugs" and "prostitutes." This is how Spencer conceived of economic and racial disparities in the rapidly gentrifying area of downtown Cincinnati: (black) thugs and prostitutes vs. (white) business owners like him who had dedicated themselves to the virtuous cause of "revitalization" (i.e., making money). In his official campaign materials he's careful to totally scrub these issues of any mention of race, though anyone who knows anything about broken-window policing can read between the lines easily enough. But Spencer was much more explicit about who exactly he sees as the criminal class on his blog, where he frequently let his hair down and got racist af.

Just to be clear, African-American Ross Love was a radio station owner in Cincinnati (though not at the time of that shootout, according to the blog where I found these Nick Spencer quotes), and "Ridin'" is a rap about police brutality against black people. They weren't related to the shooting in any way. 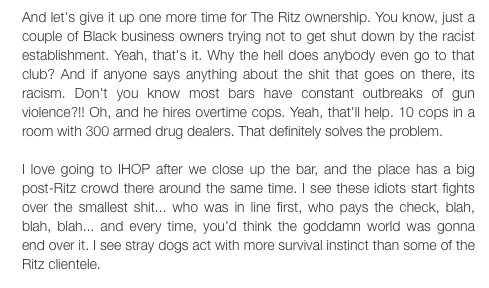 The above is just one example of how Spencer routinely characterizes black people as "drug dealers." These club owners didn't have anything to do with the shootout he's talking about, either. 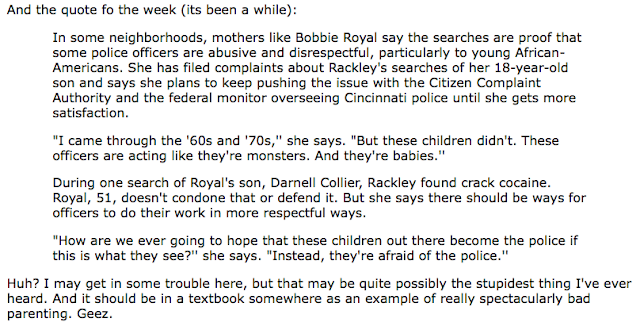 IV. Spencer's Persecution Complex
Nick Spencer wanted to terrorize, incarcerate, and otherwise displace poor people and small-time criminals first and foremost for business reasons, but he also believed that his personal safety was on the line. Personal safety is another running theme you'll notice if you take the time to look at what Nick Spencer has written over the years. Take, for example, this early 2005 blog post in which Spencer seems to believe that he was being pursued by a cabal of "drug dealer and hooker" assassins:

His paranoid campaign to paint (presumably) unarmed criminals as violent psychopaths who were hellbent on ruining his life continued through the remainder of his campaign. Check out this incredible excerpt from "Spencer Under Siege," a June 2005 article from CityBeat: 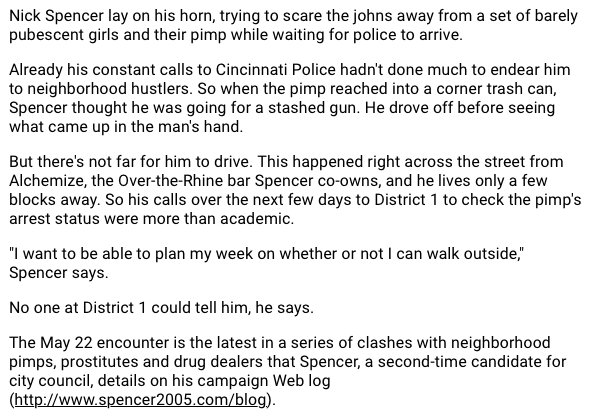 Note the invocation of an imaginary gun: "When the pimp reached into a corner trash can, Spencer thought that he was going for a stashed gun. He drove off before seeing what came up in the man's hand."

V. Conclusions
The intersection of art and the political ideologies of creators is far from straightforward. I leave you to your own conclusions. I just want to state for the record that Nick Spencer's political campaign in 2005 involved a proposal to eliminate all human services in the city of Cincinnati in order to fund the brutalization, imprisonment, and/or relocation of the poor black people that he worried were devaluing his bar and threatening his safety. He also, behind the scenes, routinely lobbed ludicrous allegations of responsibility against black business owners regarding crimes that they plainly had nothing to do with. Ultimately, Nick Spencer "revitalized" downtown Cincinnati by getting evicted, stiffing contractors, and moving to another state to begin his new life as a comics writer. He now spends his days writing stories about how Captain America is a nazi and feeling persecuted by social justice warriors and comics critics on Twitter dot com.