here are some comics links

Update: Not doing good. Not. Doing. Good. Let's talk about some comics stuff. 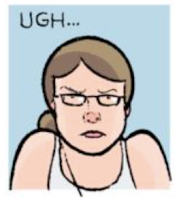 A thing that comes up for me when I think about Ware lately is Joe McCulloch's smart thread (upon the occasion of Ware's last New Yorker cover) from a few months back. "I suspect that Ware is using these covers to explore different aspects of his art," he wrote. "Which is to say, things he otherwise doesn't get the chance to emphasize in comics, such as faces." This is a curious idea to me: that the New Yorker is like Ware's experimental sketchbook, whereas his own comics are the "real" finished work. I have no idea if this reflects Ware's actual mindset and practice (it certainly sounds plausible), but it does, as an observation, reflect what I perceive to be a thing, which is that Ware's New Yorker stuff doesn't quite count in people's consideration of him as an artist. Whether that's because the work is more commercial or because it's bad is one question. Another thing that occurs to me is that Ware's New Yorker audience is surely much larger than his own comics audience. (This may not in fact be true; I don't actually know the numbers.) Like, probably a lot more people read "Snapchat" than Building Stories, right? So there's a sense in which that work is arguably more real.

2. It's Actually About Ethics in Comics Journalism
I've been deeply confused and sort of fascinated by the amount of praise I've seen for this profile of Steve Ditko, which in my view blurs the line between harassment and journalism. (Props to Dan Nadel, who is the only person [that I've noticed, anyway--haven't looked too deeply into it] to explicitly, publicly comment on this.) Look...I'm reading this piece through a very particular pair of eyes--I'm biased, without a doubt--but I think the "reporting" it describes reads less like the work of a professional journalist and more like the behavior of an entitled, aggressive fan. I shouldn't be the one diving into this for any number of reasons, but you know what? Fuck it.

Let's take a quick look at how the author of the profile, Abraham Riesman, describes his attempt to interview Ditko, an 89-year-old man who hasn't granted an interview with a journalist in almost 50 years. Everything in purple is taken directly from the piece:

Here's what Riesman learned from harassing Ditko, per the piece:


The encounter encapsulated the fundamental paradox of Ditko, the one that makes him a source of both fascination and frustration: He despises people making claims about him without getting their information firsthand, but he only provides that information piecemeal and on his own terms, in the form of elliptical essays on scattered topics. He has often said he wants his work to speak for itself, but then he writes about how no one understands it — and when his screeds about the work confuse or contradict, there’s no way to have him clarify what he so passionately wants you to understand. It isn’t a dialogue. You can’t ask a follow-up question. (emphasis mine)

Question: Since when do artists owe their audience a dialogue? The argument I see here is incredibly condescending: Ditko is a bad communicator. Ditko is working against his own interests. Ditko is being unreasonable. Yeah, right, what a fucking jerk, wanting to present information on his own terms when he's been egregiously misrepresented his entire life. How dare he!!!

Literally everything I know about Ditko I learned from this article (and man, do I have some affection for the old guy, with his "poison sandwich" and his Coke-bottle glasses), but it seems to me that Riesman has fundamentally misread who he is. I mean, is Ditko really a recluse? He's hardly Elena Ferrante. Ditko has an office; he's publishing work; and he talks to other industry figures, who know how to reach him. Riesman makes Ditko sound uptight and unhinged for breaking professional ties with Fantagraphics because Groth made fun of Ditko--a guy whose whole entire thing is feeling resentful about being disrespected as a professional--in a book of Ditko's own stories. Gosh, I wonder why doesn't Ditko want to talk to all these awesome comics journalists? Who will crack this case??

You know, while I could care less about the Lee/Ditko feud, on some level I get where Riesman is coming from. (Who among us doesn't wonder what really went down between Axl and Slash?) He clearly has real respect for this man's work. I sort of see how it all happened...making a blockbuster movie the peg for his curiosity about a decades-old feud that this artist never dished on to his satisfaction...the rationalizing he did to excuse his increasingly inappropriate behavior along the way...using a classic writearound technique for a profile that he himself devised. Do you imagine that his editor was pressing him to get this scoop on some comics feud from the 1960s? Baked into the narrative as a sort of preemptive defense there's all this talk about doing his job well--but does being a journalist automatically give you the right to pursue whatever it is you want to know? To grill a 90-year-old man about a painful episode that happened 50 years ago about which no one outside of a small group of enthusiasts really cares?

Here's the thing: Artists have a right to privacy. Whether or not a reporter chooses to override that right is a privilege. And at the risk of sounding sanctimonious--this is something I've been thinking about a lot lately, given the Ferrante thing--it's a privilege that should be exercised with discernment and great care. If you're going to use it, the justification needs to be something better than "I'm dying to settle my red-faced fanboy messageboard feud from the early aughts." It needs to be something more than "I need a gimmick for my article that creates more intrigue than 'I got turned down flat just as I knew in my heart I would be." I don't know, ethics in journalism isn't cut and dry, and some of the lines I've drawn here are arguable. But this is a conversation we ought to be having. We need to respect--and protect--artists' privacy.

Here's something nice for a change on twitter dot com: cartoonist Alex Degen previewed some incredible panels from...something?...due out in 2018. There's a LOT going on here spatially, conceptually, palette-wise, etc.--definitely check out the full thread--but anyway here are a few of my favorites. That last one reminds me of Diego Rivera?? 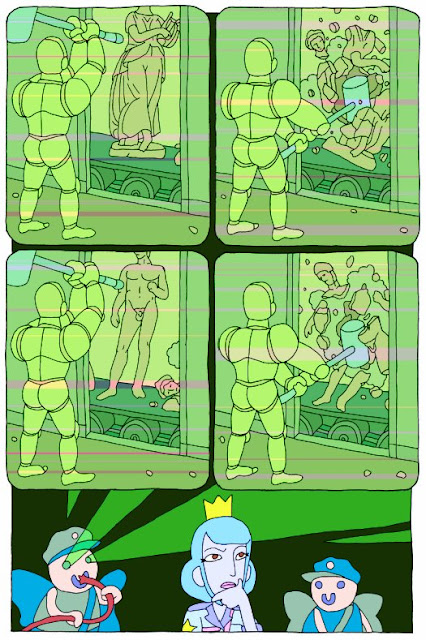 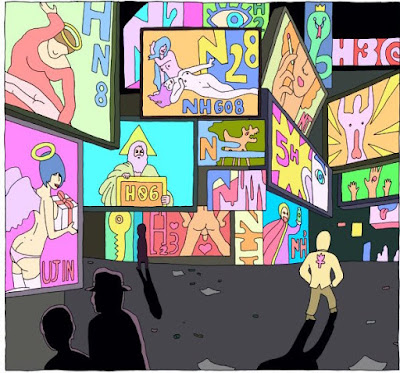 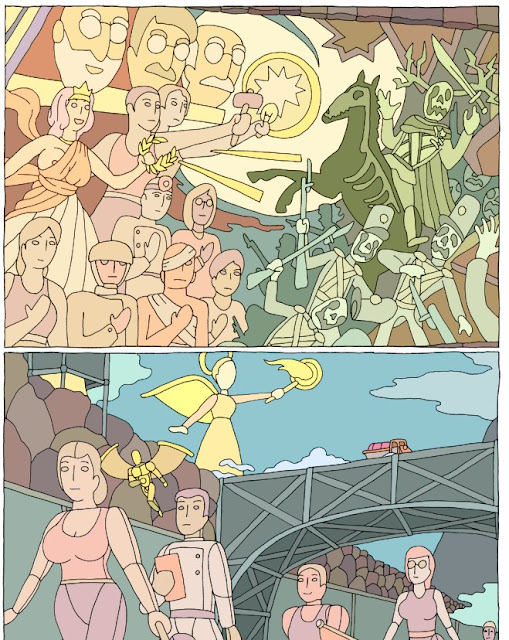 4. Tahneer Oksman on Nadja Spiegelman
I haven't yet had a chance to read Nadja Spiegelman's book about her mother, Françoise Mouly, but my friend Tahneer has. Her interesting review at Public Books places it in the tradition of Alison Bechdel's whole thing of trying to understand herself through her parents. Here's a tidbit that took me aback: Nadja's parents (her dad is Art Spiegelman) weren't too happy about her same-sex relationship. Yeesh. Anyway, I look forward to reading this.

5. Not Comics: Shrill on racism and politics
Here's a (pre-election) take from Ezekiel Kweku that I missed when it was published: "Declaring who is and isn't racist is a parlor game we don't have time for." Much to think about here.
SaveSaveSaveSave
SaveSave
Posted by Kim O at 7:44 PM