in a future where all the crabs are dead

The insomnia's back, fuck my life. My clock runs late on a good day (always has), but every few years I cycle through a few months or more where I have extra terrible trouble getting to sleep. Sometimes I wonder: what is this alien frequency I've tuned into, and what else is happening on this channel? Sometimes it's boring old depression, I guess, but other times I can't really attribute it to anything. The last time must've been around 2013 because I remember the constant dejection of trying to fall asleep to the Canadian astronaut Chris Hadfield tweeting about whatever he'd already overachieved at the International Space Station in what was, for him, late morning in outer space. Like for each of these insomnia jags there's always some marker that lets me know when I've crossed over from being up horribly late to being up egregiously, painfully late, and at that time it was these astronaut tweets. Prior to 2013 the point of no return would've been some TV-related thing, but at some point I started working on "sleep hygiene." Now instead of watching TV, which I love with my whole heart, I stare at my phone and feel unhappy. Yes, I know better, but also there was a period in my life where I read the Economist to put myself to sleep and that was maybe worse. It worked, but it just wasn't worth it.

So anyway I'd still be trying to get to sleep and Commander Chris Hadfield would've orbited Jupiter twice, performed his strenuous exercises for the day, eaten several pouches of healthful space gruel, etc., and I'd just be lying in bed staring at my phone, every cell exuding the literal opposite of whatever that is. Extremely dark, tired energy. I'm not sure why I'm even thinking about this so much except that recently I had to read an astronaut's memoir for work that was largely about some guy (not Chris Hadfield, mercifully) who lived at the International Space Station for a year, and it was wild how much of his life there was hideously banal. Like literally 75 percent of this book was just him watching CNN while he fixes the space toilet. I just have to wonder how little you respect life's mysteries, to write a book like that.

A few nights ago I was going through my pre-dawn ritual of staring at my phone for 4.5 hours before going to sleep I encountered the most incredible thing I've seen in a while. It's two guys at AV Club talking about Hideo Kojima's Death Stranding, which is, if I understand them correctly, a series of 15-minute art films...released over a period of years as...trailers?...for a video game?...starring Hannibal and Daryl from Walking Dead? It's sort of unclear. Despite my affection for both Daryl and this utterly unhinged synopsis, I don't want to learn anything more about this project, ever, much less watch the actual trailers, if that's what they even are. I just don't see how they could live up to (much less surpass) this synopsis, which I have already read at least half a dozen times: 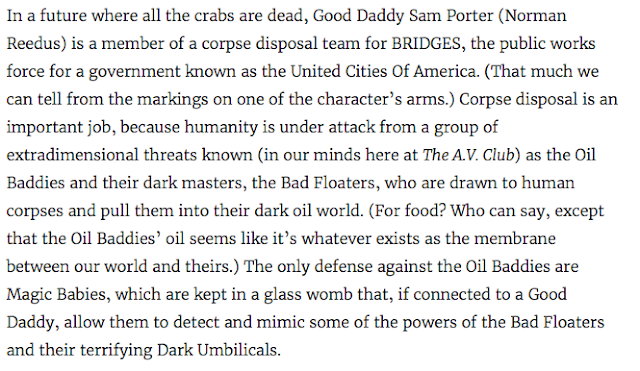 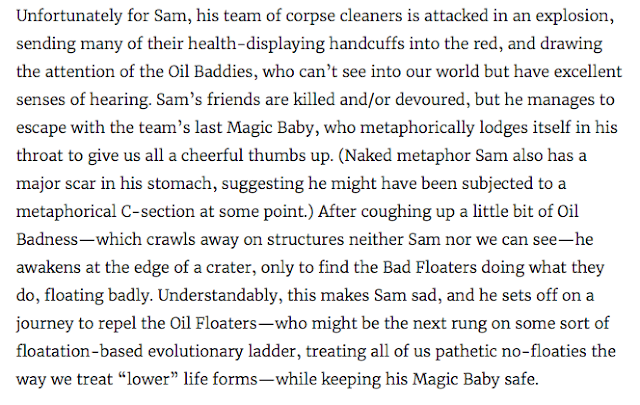 If I had to pick my favorite part, I guess I'd go with "in a future where all the crabs are dead" OR the baby metaphorically lodging itself in someone's throat OR Daryl's metaphorical C-section (what is going on with these metaphors??) OR the Guillermo del Toro cameo, which was just unexpected. Tough call.

Another curious thing the last few days has been watching people argue about "Cat Person." Like, oh right, this is the sort of thing we used to argue about on the Internet before 2016 happened. A viral short story. How quaint! A day or so ago the Cat Person "backlash" began, or so I hear. (Everyone on my twitter loves it, anyway.) One thing I legitimately don't understand: since when is not liking a short story a "backlash?" Usually that's how it works: some people like a thing, and then some people don't. But maybe we don't have that anymore.

It's a queasy little piece of work. Sort of artless, in my opinion, though that isn't what makes it bad. Like...the achievement of this short story so far as I can tell is in making something totally plausible have the artificial sheen of a short story. The symmetry with the characters' fantasy lives--where her fantasies are about him being secretly vulnerable and better than he seems, and his fantasies about her are all weird and crazy and jealous--all of that, and the banality with which she considers getting murdered, the sort of fluctuating between feeling afraid and ridiculous, the way that even pathetic men can have a certain menace, and then the ending--emotionally, it rings true. The characters are really believable, I'll give it that. But as a piece of writing, it largely just seems like bad craft. I feel very aware of it as a story that has been constructed. In fact I've maybe never read anything that seems so naturalistic and so fake at the same time, particularly with the fantasy stuff and with the ending. The ending is just beyond hacky even though I find it totally believable? So that's weird, but I think it comes down to on a technical level there is a real clumsiness in the story's construction. Even the detail about the cats felt like artifice, very In the Writer's Workshop 101.

I've seen a lot of really defensive reactions around Cat Person, a lot of "if you don't like this story, you've clearly never been on a bad date"-type takes. I don't get that at all, this idea that identifying with someone in a story means you have to love it. People are all messed up about art and identity now, but most of the time this gets discussed in really unintelligent ways. I totally understand that people love stories because they identify with characters or plots--and whatever, that's valid. You can love something for any reason you want. Me, I guess I need something more than that. Some sort of insight, some beautiful prose, an interesting question, an entertaining story. Maybe at least one of those things? "People are hard to know, and sex can be bad"--I don't know, I guess that strikes me as the literary equivalent of living in space and writing about watching CNN and fixing the toilet.
Posted by Kim O at 1:04 AM